Independence, Wil-style:
Yesterday, after running errands, Wil kicked off his crocs in the middle of the kitchen, opened the fridge and said he was hungry.
“Ok, buddy, I’ll make a sandwich while you put your crocs where they belong.”
“I want a salami and cheese and spinach sandwich on a little bun.”
“Ok, will do, now go put your crocs away.”
I got busy making sandwiches for Wil and his sisters. When I finished making their sandwiches, I picked up their plates from the counter and turned around to place them on the kitchen table. There on the floor in front of me, right where he left them, were Wil’s crocs.
“Wil, I thought I told you to put your crocs away.”
“Hmph!” Crossed arms.
“Ok, I guess no sandwich then until you put your crocs away. That was the deal.”
“Oooooh, that means two sandwiches for me!” Elizabeth teased.
“No!”
“Then you need to put your crocs away, Wil,” Elizabeth said.
The girls and I sat down at the table to eat our sandwiches while Wil stood there unmoving. After observing us munch on our sandwiches for awhile, Wil walked over to pick up his crocs. He then walked in my bedroom, where he usually watches TV, and set them down right in front of the TV.
“Wil, I appreciate you moving your shoes, but I asked you to put them where they belong. You know very well they do not belong in my bedroom. Now please put them away where you know they belong.”
More standing still. Then after a few moments, he picked them up and put them in the hallway.
“Wiiiiiilllllll,” I said looking at him sideways.
More standing still. Then after a few moments he put them in his room right next to his bed.
“Getting closer, but not quite there, buddy.”
His crocs go under his dresser, which is right next to his easel. He put them under the easel. Close enough.
“Ok, I’ll take it. Now come join us for lunch before Elizabeth eats your sandwich.”
“Hey!” He said, then started laughing and sprinted barefoot to the table. He sat down and took a big bite out of his salami and cheese and spinach sandwich.
“Mmmmmmmm!” 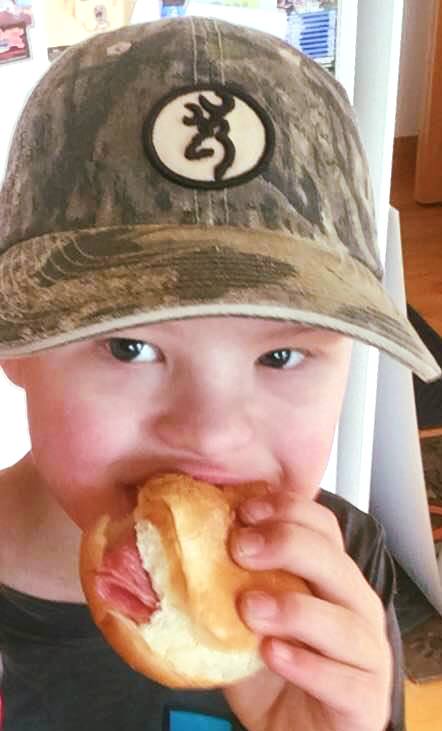